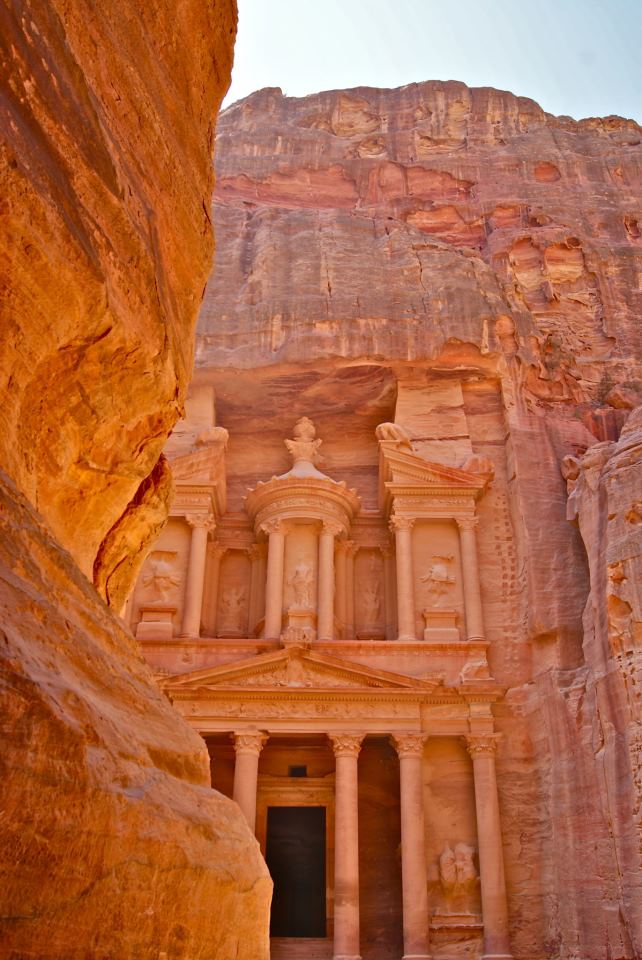 You may have seen movies that featured the Al-Khazneh or the Treasury at Petra (e.g. Indiana Jones and the Last Crusade) and wondered where in the world it is.  Petra is located in the country of Jordan, south of the capital city, Amman.

Because this was my first trip to Jordan, I decided to book it through Petra Night Tours, which I highly recommend.  The company assisted me as soon as I got off the plane, through passport control and even had a private car waiting for me to take me to my hotel in Amman.

I started out really early for the 3 and a half-hour drive to Petra.  I thought this was better as it was less crowded and the temperature was still bearable (because even though this  was in October, it was still very hot).   When I arrived in the old town of Petra, a personal guide welcomed me and took me in for a 2-hour tour.  My tour included the entrance fee to Petra. 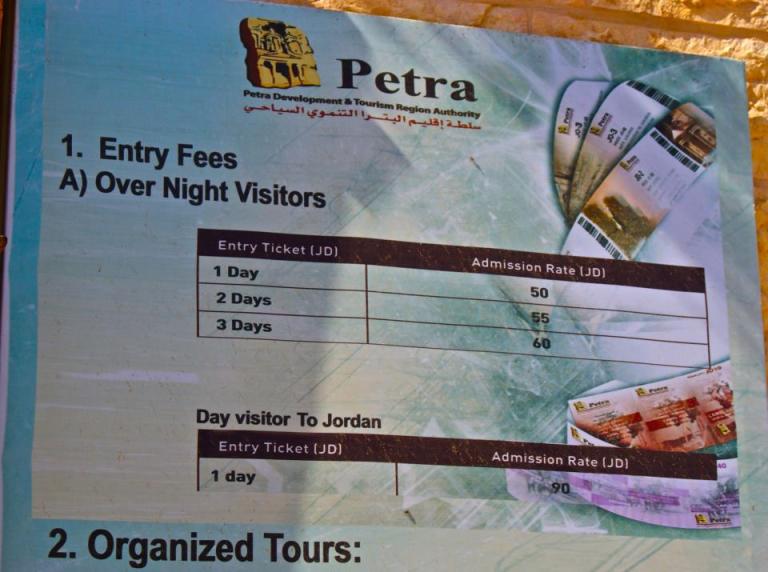 Inside, there was a long walkway. It was a little intimidating but the beauty of the natural rock formations became quickly evident to me.

This picture shows that “a few” tourists were already within the Petra site at only 11 in the morning .

The distance from the entrance to the famous Siq was about 600 meters and there were some people who could not tolerate walking that far under the heat of the sun. For them, there was the option of taking the tour on horseback.  I preferred to walk so that I could take my time with each rock formation and to snap decent photos (hard to do sitting on a horse). 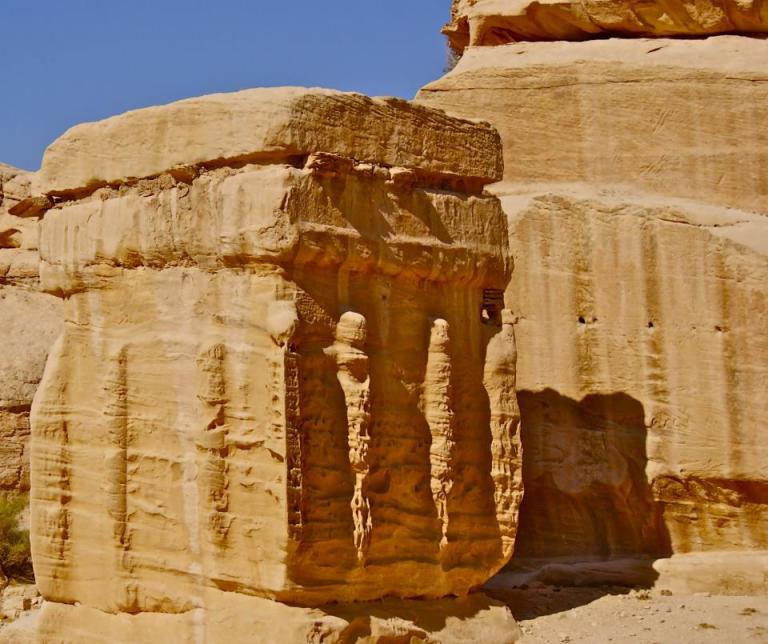 Across the Djinn blocks were the Obelisk Tomb (top) and the Bab Al-Siq Triclinium (bottom).  Even though one was on top of the other, they were said to be unrelated as the tomb housed the bodies of a dead family and the triclinium was where sacred feasts for the dead were held. 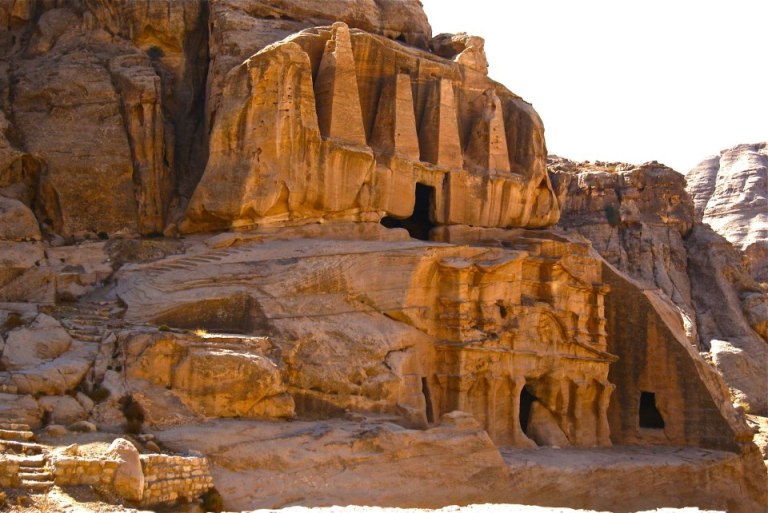 The Obelisk Tomb takes its name from the four pyramidal pillars on the facade.

I finally arrived at the Siq, the main entrance to the ancient city of Petra.  Rock walls towered on both sides creating a dim and narrow passage..only about 3 meters wide on some points. 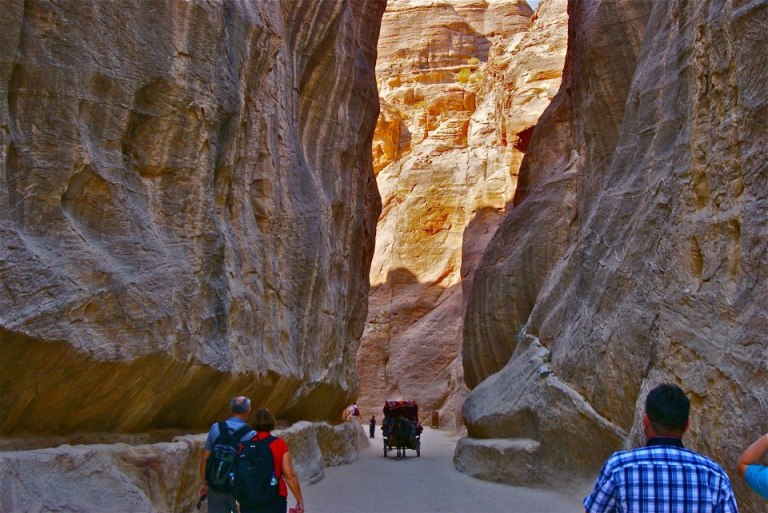 This majestic road stretches for about a mile to end at the Treasury, Petra’s most famous structure.  The Siq is a natural geological gateway of some sort caused by tectonic forces and smoothed by water erosion.  The height of the rock walls are approximately between 90 – 180 meters (300-600 ft) in height.  In 1998, excavations were done to deepen the road by more than 6 feet and due to the digging, a group of statues were discovered.  I was very much in awe as I walked the length of the Siq. 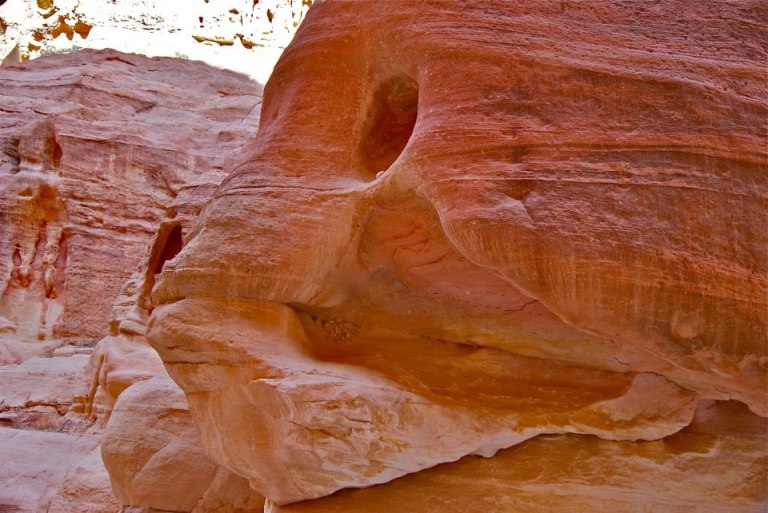 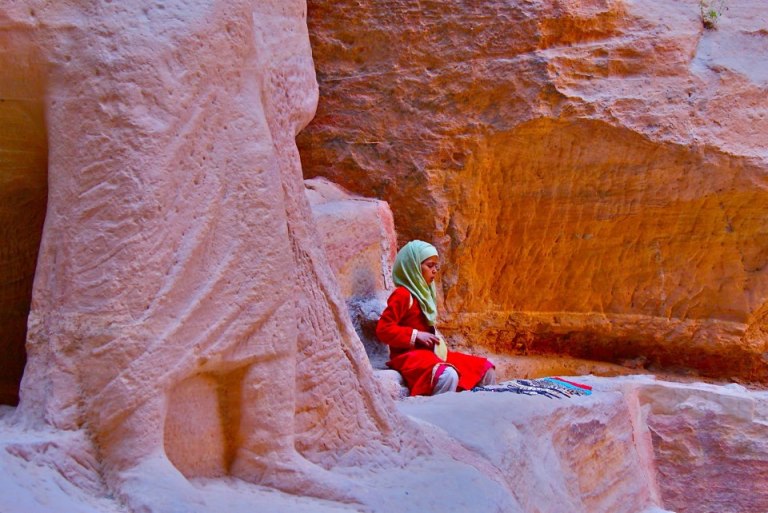 A young girl selling some “artifacts” and some jewelry in one of the sections of the Siq.

Those who chose to walk can pause along the way, examine the wonders of nature and take some amazing photographs. 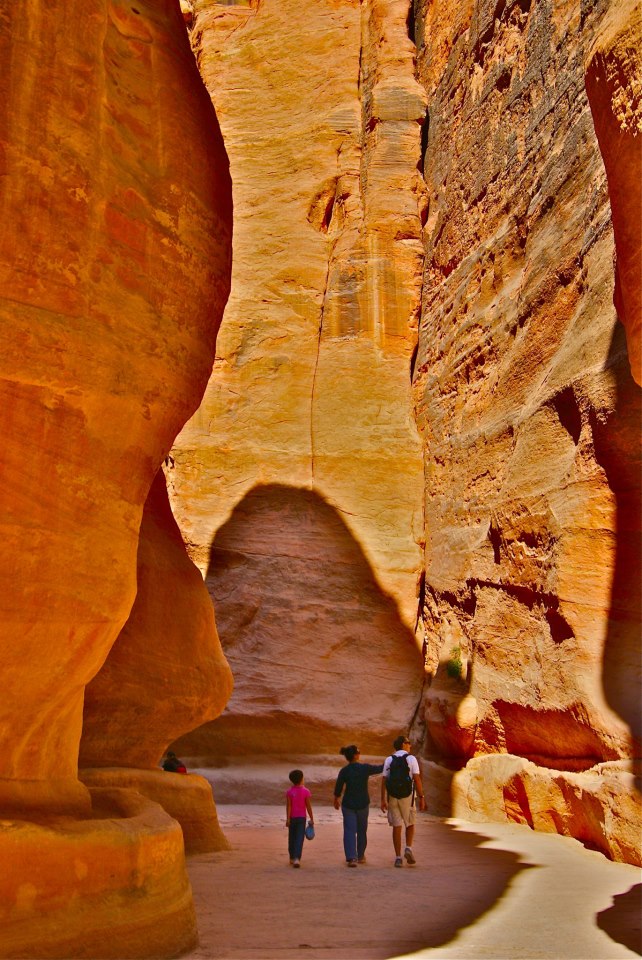 On the left side hand of the Siq is the water channel. It used to be covered, but long ago, ancient floods washed away the cover stones. 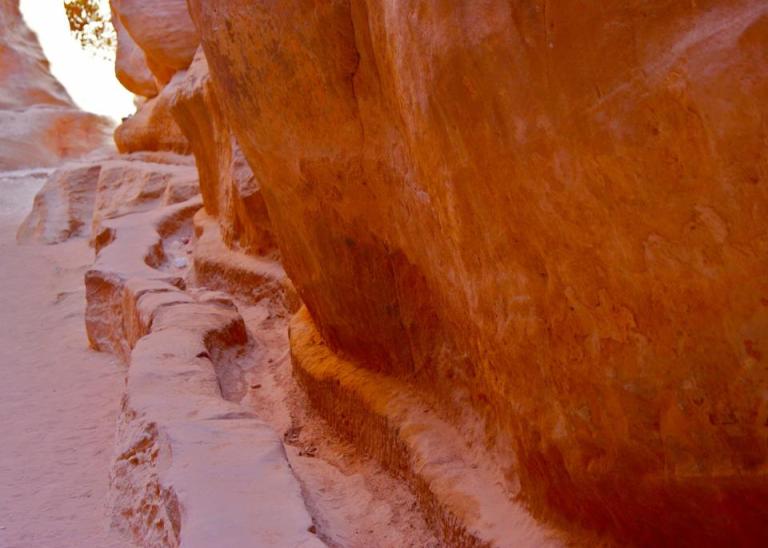 Take special note of how the water eroded away the sandstone. There are incredible colors in the rose-red rock mountains of Petra. My guide told me that the red color of the rocks was due to the  iron deposits. 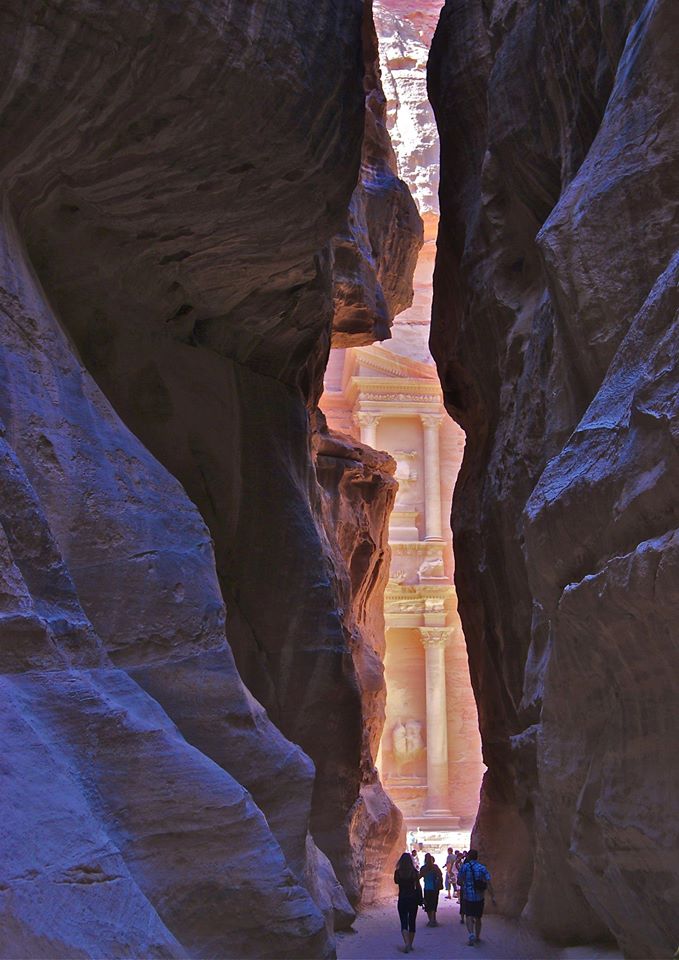 As I approached the end of the Siq, the first and probably the greatest monument in Petra slowly came into view..The famous Treasury. I stopped and let the feeling of disbelief sink in.. I’m actually here and one of the new 7 wonders of the world was right in front of me.  It was definitely an unforgettable moment.

Intricate carvings on the Treasury

A closer look at the El-Khazneh or the Treasury at the end of the Siq.

The contrast of the shade from Siq to the sun glaring at the Treasury gave this monument a dramatic look. It was awe-inspiring to look up at the meticulously-carved architecture that have survived all these years. In Arabic, El-Khazneh means Pharaoh’s Treasury, from an ancient myth that treasure was concealed here by a powerful black magician.

A night tour of old town Petra was also available and based on pictures and some reviews, that would also have been worthwhile. My restricted schedule, however, only allowed for the day tour, which was absolutely fine with me because I was able to appreciate the intricate detail of the structures in the light of day.  My tour guide gave me about 15-20 minutes to just walk around the area and take pictures, after which, I went straight back  to seek refuge from the scorching heat (the only drawback of the day tour) in the shade of the Siq.

This is a Camel. Huh!

After staring and taking a mental picture of the Treasury in my head, it was time to walk further into the old town of Petra and discover more of its rich history.  We then came to the Street of Facades which was lined with towering and majestic tombs. This street led us to the heart of the “city proper” of Petra.

This is the ceiling inside a cave. The colors are due to different mineral deposits.

The canyon walls are lined up with smaller tombs for the not-so-rich people.

According to my tour guide, there were different tomb sites for poor and rich people. Tombs of the affluent are usually located on top of a hill while those of the impoverished were closer to the ground.  These were also actual residences for families, only, there is a separate area inside for a dead family member. Imagine having a corpse just across the room where you dine. 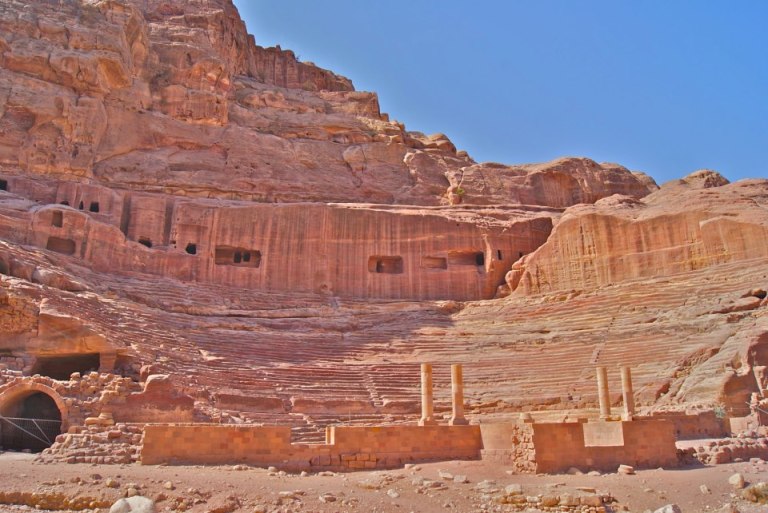 Finally, I arrived in the heart of the city where Petra’s theater is located. It was cut out from a solid rock and must have been majestic at one time but was now badly deteriorated.  Since it looked like an amphitheater, many people believed that it was built by the Romans, but it was actually the Nabataean, a group of arabic people who settled in Petra. 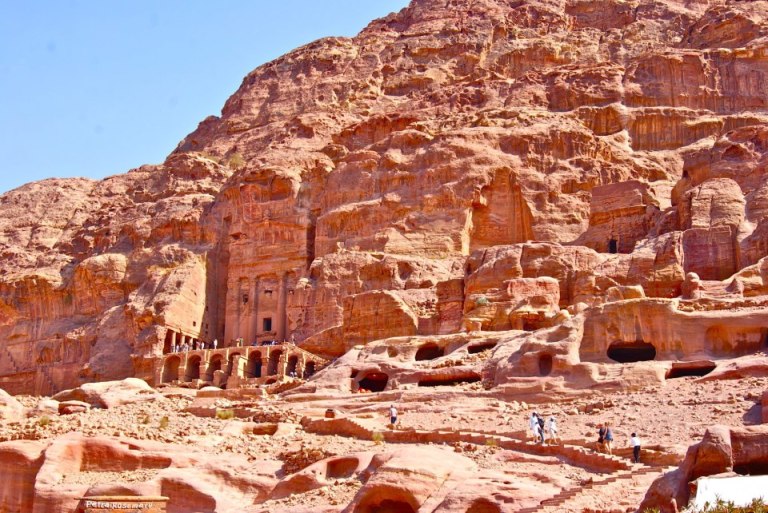 After seeing the “poor-people” tombs, it was time to see The Urn Tomb or the so-called Royal Tomb.  Obviously it was built high up on the mountain side and require climbing up a number of flights of stairs.  It was believed that this was the tomb of the Nabataean King Malchus II who died in 70 AD. 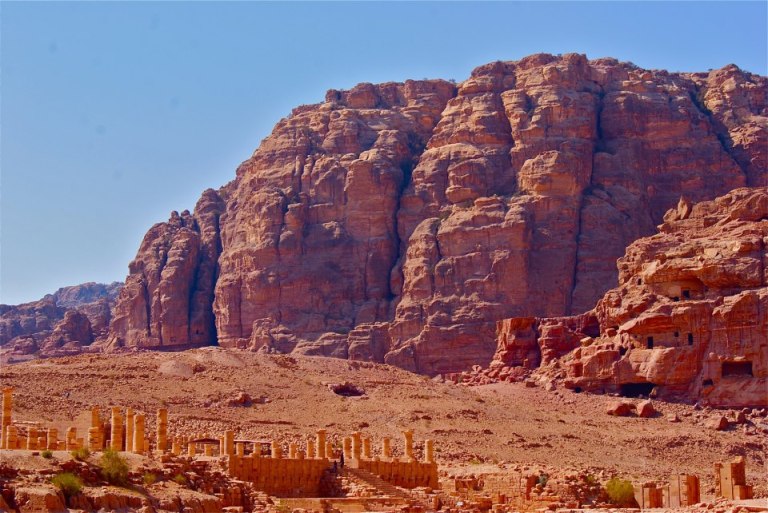 On the right side of the picture above is Jebal Habis, a small mountain with tombs at the base.  Um el Beira is the great flat-topped mountain behind it, so named from a series of water cisterns that are found on the top.  This is a challenging hike if that is your inclination (no pun intended).

I think the kid noticed that  I am taking  a picture of him, the donkey, Jebal Habis and the Um Al-Beira

Ok I get it! enough of the Treasury…..or not!

The “new” city of Petra.

It was mid-afternoon by the time I finished exploring the Old Town of Petra.  My final quest: seek out my driver so I could head back to Amman. Unlike Indiana Jones, this was not to be my last crusade.